Amazon fisherman from Peru, Anthony Giardenelli, was hunting catfish in low water conditions of the Amazon river when this world-record giant Gamitama took his bait and took off. Anthony immediately knew enough to cut the boats from their tethers just in time to allow the fish to pull the boat away from shore. 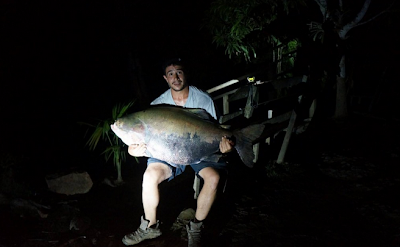 Once he finally landed it, the fish weighed 81 pounds and fed over seventy people over the course of a week. The guests at Otorongo Expeditions jungle lodge were treated to a local delicacy that would be impossible to top.


His achievement is documented here at Fishing-WorldRecords.com

We have followed Anthony's Peruvian fishing career for years as have many other fishing celebrities, documentarians, scientists, and featured experts as he has become a go-to guy for Amazon fishing needs - Who could ever forget this footage of Anthony and his crew hauling in this massive Electric Eel!